A Cry From The Cross 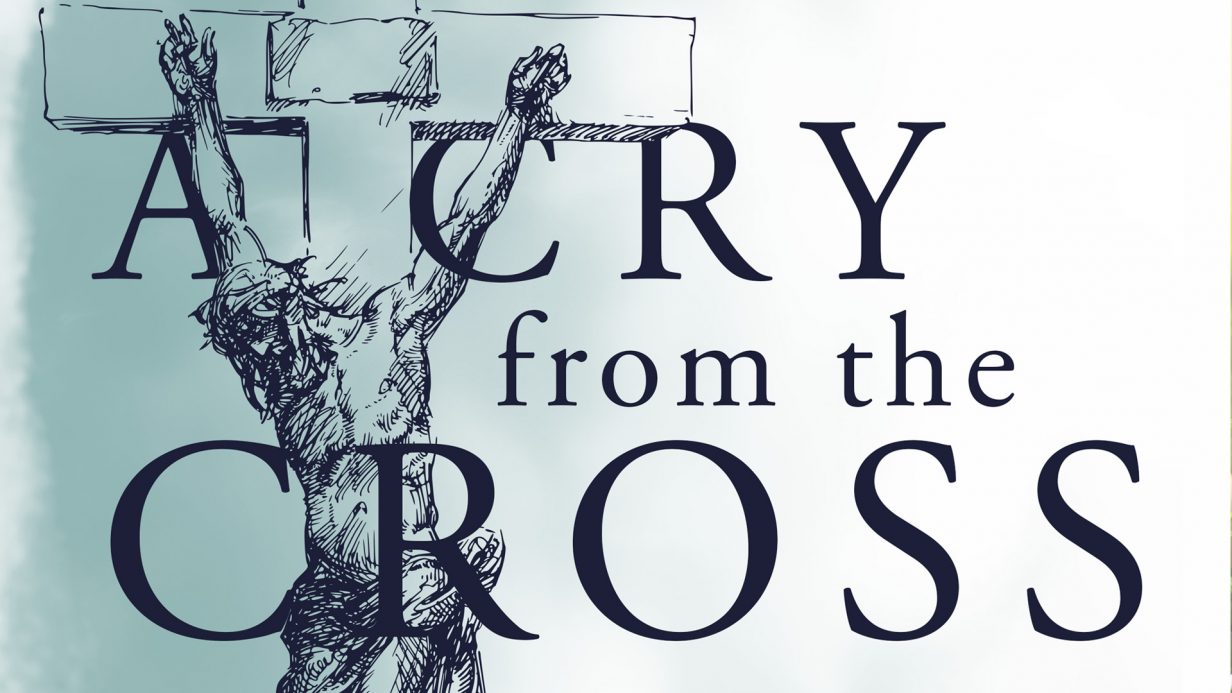 “Now when the sixth hour had come, there was darkness over the whole land until the ninth hour. And at the ninth hour Jesus cried out with a loud voice, saying, ‘Eloi, Eloi, lama sabachthani?’ which is translated, ‘My God, My God, why have You forsaken Me?’ Some of those who stood by, when they heard that, said, ‘Look, He is calling for Elijah!’ Then someone ran and filled a sponge full of sour wine, put it on a reed, and offered it to Him to drink, saying, ‘Let Him alone; let us see if Elijah will come to take Him down.’ And Jesus cried out with a loud voice, and breathed His last. Then the veil of the temple was torn in two from top to bottom. So when the centurion, who stood opposite Him, saw that He cried out like this and breathed His last, he said, “Truly this Man was the Son of God!” There were also women looking on from afar, among whom were Mary Magdalene, Mary the mother of James the Less and of Joses, and Salome, who also followed Him and ministered to Him when He was in Galilee, and many other women who came up with Him to Jerusalem” (Mark 15:33–41 NKJV).

The description of the death of Jesus in Mark’s gospel paints a terrifying picture: a mutilated man hangs among other condemned men as the world is enveloped in unexplained, unnatural darkness. Jesus is actively dying. The horrific, noisy scene is punctuated with His anguished cry. He calls out in Aramaic, “My God, My God, why have You forsaken Me?” Jesus’ gut-wrenching question causes the hearer/reader to believe God abandoned Him. This question has been addressed in books and songs and seminary classes. Sermons have offered these explanations: “God turned His back on Jesus; God cannot look at sin; Jesus was forsaken so that we never have to be.” The Holiness/Pentecostal tradition, whether by understanding or misunderstanding Wesley’s doctrine of perfectionism, seems to lend itself to the belief that God rejected Jesus. After all, Jesus was carrying the sin of the whole world. Teachers taught God hates sin so much it will cause Him to revoke His relationship with you. Habakkuk 1:13 was often (half) quoted to support this premise. “You are of purer eyes than to behold evil, And cannot look on wickedness.” Curiously, the remainder of that verse confirms that God does look on evil: “Why do You look on those who deal treacherously, And hold Your tongue when the wicked devours a person more righteous than he?” Habakkuk is revealing his puzzlement about this dichotomy in the nature of God: God is holy and therefore should not look at evil—so why does He, in fact, look on those who sin? This verse in Habakkuk does not prove God rejected Jesus.

So, why did Jesus ask that question? Look at Psalm 22. It mirrors what Jesus experienced on the cross. Psalm 22 begins, “My God, My God, why have You forsaken Me? Why are You so far from helping Me, And from the words of My groaning?” (v. 1). It then continues with a detailed description of what a righteous, suffering victim felt and experienced. “I am a reproach of men, and despised by the people” (v. 6); “All those who see Me ridicule Me . . .  they say, He trusted on the Lord that He would deliver Him: let Him deliver Him, seeing He delighted in Him” (vv. 7, 8); “I am poured out like water, and all My bones are out of joint; My heart is like wax; it has melted within Me” (v. 14); “My strength is dried up like a potsherd, and My tongue clings to My jaws (v. 15); You have brought Me to the dust of death; For dogs have surrounded Me; The congregation of the wicked has enclosed Me. They pierced My hands and My feet (v. 16); I can count all My bones; They look and stare at Me (v. 17); They divide My garments among them, and for My clothing they cast lots (v. 18). This detailed description of what seemed to be a crucifixion in Psalm 22 was written approximately 1000 BC. Crucifixion wasn’t devised until 300-400 BC, by the Persians, 600 years later.  Does Psalm 22 foretell Jesus’ crucifixion? Does it describe Jesus’ hands, Jesus’ feet being pierced? Is it Jesus’ clothes for which they gambled? Could all these details be a different victim, another sufferer?

A Question is Not an Answer

Consider this: The first verse of Psalm 22 identifies the suffering one as Jesus. A word study of the phrase, “Why are you so far from helping me,” reveals that in the original Hebrew, “helping me” is the word yeshua. A correct rendering of verse 1 could be, “My God, My God why have You forsaken Me? Why are you so far from Yeshua?” Jesus’ name in Hebrew is Yeshua. Although the possibility of this being coincidence is plausible, finding His name here may be one more stone for constructing Psalm 22 as prophecy concerning the crucifixion of Jesus. Was it coincidence that Jesus asked the same question as Psalm 22:1? Was He unaware of the Hebrew Scriptures? No. It is probable He was quoting the beginning of Psalm 22 from the cross. By doing so, He is drawing the attention of the observant Jews standing there to that psalm and indeed recording for all Christians that what He was going through is all there! Prophesied in Psalm 22! He was comforting them, us, and maybe even Himself with the Word.

David continues to prophesy in Psalm 22:24. Speaking of God the Father, he says, “For He has not despised nor abhorred the affliction of the afflicted; nor has He hidden His face from Him; but when He cried to Him, He heard.” Jesus rightly felt forsaken on the cross. The entire weight of humanity’s sin—past, present, and future—lay on Him. “He Himself (Jesus) bore our sins in His body on the cross, that we might die to sin and live to righteousness; for by His wounds you were healed” (1 Peter 2:24). “He is the atoning sacrifice for our sins, and not only for ours but also for the sins of the whole world” (1 John 2:2). Yes, God hates sin—for many reasons. Jesus hates sin. And yet, He chose to become a sin offering and carry sin’s punishment for everyone. The very people for whom Jesus bore that odious burden are the ones who turned and continue to turn their backs on Him. God did not. Further, the separation between Father and Son contradicts 2 Corinthians 5:19: “God was in Christ reconciling the world to Himself at the cross.” As the song says, “Such a marvelous mystery.”

Jesus’ question was not proof God abandoned Him. It was a question, not an answer. It was a reasonable question because carrying sin and sickness caused the fully human Jesus to feel abandoned. It was a necessary question because it signaled the fulfillment of the prophecies in Psalm 22. The Holy Spirit revealed to David the crucifixion of Jesus: specific words, sights, sounds, emotions. It was horrible but it fulfilled God’s good and loving plan of redemption. Isaiah says, “It pleased the Lord to bruise Him” (53:10).

A hallmark of Jesus’ ministry was that He was misunderstood. His mother didn’t understand Him (Luke 2:48). The Pharisees certainly didn’t understand Him. Often, the disciples did not comprehend what He was telling them. He healed people and people said He had a demon. He socialized with sinners and people called Him a drunken glutton. Now at the end of His earthly ministry, Jesus is misunderstood on the cross. “Let us see if Elijah will come.” Mocked as He hung there in pain and disgrace, the One who miraculously provided the best wine for the wedding at Cana, is offered spoiled wine to drink (Mark 15:36). This is another fulfillment of Old Testament prophecy (Psalm 69:21).

Jesus cried with a loud voice (Mark 15:37). John 19:30 tells us what He cried: “It is finished.” Psalm 22 ends with “He has done it.” In Hebrew, guess what that phrase can mean? “It is finished!” Here in Mark it is one word in Greek, tetelestai. It literally means, “Paid in full.” And then He breathed His last.

At the entrance to the Holy of Holies was a thick, forbidding veil. As Jesus died, the veil was torn in two from top to bottom; symbolically, God initiated the process and gave every person admission into His presence. The next statement in Mark’s account was made by a Roman centurion. “Truly this man was the Son of God!” Here is the result of the veil being torn! Men and women have been given access to the presence of God and, because of the cross, they can recognize Jesus as God.

“There were also women looking on from afar” (Mark 15:40). At the end of Mark’s telling, the most faithful disciples of Jesus are revealed. They are His female followers: Mary Magdalene, another Mary, Salome, and many other women. The paradigm shift that occurred in the world because Jesus included women in His ministry cannot be ignored. They provided for Him and He acknowledged and affirmed their place in the kingdom of God. Here they are; watching Him die a gory, terrifying death. They are inspiring, empowering.

God had a plan before time began to pardon and sanctify us. He watched over His precious Son and received Him unto Himself when the plan was accomplished. He Himself made the way that we could know Him and live with Him forever. Praise the Lord!

“Then, when we had shown ourselves incapable of entering the kingdom of God by our own efforts, we might be made capable of so doing by the power of God . . . God did not hate us, or drive us away, or bear us ill will. Rather, He was longsuffering and forbearing. In His mercy, He took up the burden of our sins. He Himself gave us His own Son as a ransom for us— the holy for the unjust, the innocent for the guilty, the righteous one for the unrighteous, the incorruptible for the corruptible, the immortal for the mortal.” Praise the Lord for His love and unmerited favor which He has shown to us in Christ!