PRAYER & FASTING: Why The Urgency? 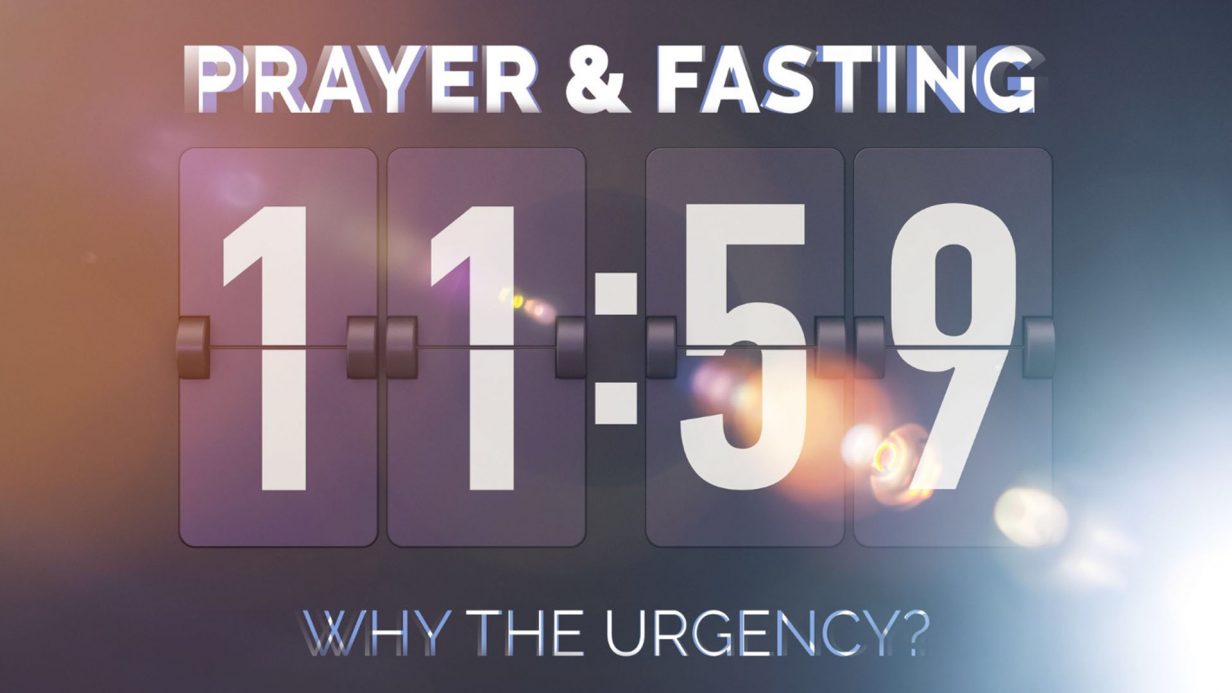 Matthew 17:14–21 gives us a glimpse into a teachable moment between Christ and His disciples concerning prayer and fasting. We see the picture of a father who no doubt was weary, beaten down, and at the end of his rope. His demoniac boy had to be watched closely because at times he would fall into the fire and at times into the water. The father reported to Jesus that His disciples had not been able to help.

After Jesus cast out the evil spirit and the boy was healed, He went to His disciples to discuss the situation. They were perplexed, with probably a little embarrassment mixed in. After all, Jesus made this look so easy. Why did they fail? Jesus told them, “this kind does not go out except by prayer and fasting” (v. 21 NKJV).

On the surface, it looked like Jesus was addressing this one issue, but digging deeper, we find that He was teaching all of us about the hierarchy of evil. Some situations, like in this case, required a greater intensity of faith that can only be gained through prayer and fasting. This is not to say that we control the outcomes of these encounters, and through our will we can make things happen. Only God decides the who, what, where, when, and why. What we do control is how diligent we are in our relationship with Christ, so that we purge ourselves and present to Him a vessel, sanctified, suitable for the Master’s use, and prepared for every good work (see 2 Timothy 2:21). So why the urgency?

To add to the complexity, the day we live in is marked by Satan saving his biggest tricks for last. Evil will continue to intensify as we approach Christ’s return. Paul told Timothy in 2 Timothy 3:13 that evil people and impostors will flourish. There will be a gradual development of hostility to the truth. Satan will pull out all the stops, in a desperate effort, to have the whole world worship him instead of God. For those given to this spirit, right and true will appear to them as false and wrong, and vice versa. There’s a spirit of sorcery on the rise in front of our eyes. Imposters are getting bolder and stronger in front of us. This is the spirit of sorcery that John the Revelator saw in the end times that will eventually bring down all the nations. Revelation 18:23 says, “For by thy sorceries were all nations deceived.” Daniel told us the evil one will speak pompous words against the Most High and will wear out the saints of the Most High (see Daniel 7:25). Jesus said in Matthew 24:22 that for the elect’s sake those days will be shortened.

Daniel recorded that in the midst of this “the people that do know their God shall be strong, and do exploits (Daniel 11:32). We want to be these people, but we can’t get there by remaining at our current level of spirituality. If we are weary and worn out by the level of evil we see today, that’s a red flag indicator that we must step up in our pursuit of God. We must experience the cleansing that only comes by humbling ourselves before Him in prayer and fasting. To be strong, and do exploits, requires continually walking in the holy anointing of God.

Not to diminish young David’s faithfulness in tending his father’s sheep, but after his anointing, recorded in 1 Samuel 16:13, his scope of responsibility and his impact on the known world increased exponentially. The Spirit of the Lord was upon the young lad from the beginning to fit him for the greater things he would be called on to perform. Fierce wild animals, a lion, and a bear (see 1 Samuel 17:34), the terror of the Hebrew shepherds, had attached his flock. His extraordinary courage and strength were evident in David’s account of the destruction of these predators and the rescue of his little ones.

After David’s anointing, he went from rescuing his father’s lambs to rescuing God’s army from the bronze armor-bearing bully, Goliath. He went from the steep, remote hillside of Bethlehem, where he spent his days watching the flock, to be the second king of Israel, after a few stops along the way. It’s God’s will for all of His people to walk in His anointing—not just a few. Let’s examine a little closer.

William Watkinson wrote in 1907, “It’s better to light a candle than to curse the darkness.” Our world is getting darker by the hour, but what will we do about it? In a post-modern world, where truth is relative, and discernment is lacking, how will I respond? Isaiah was faced with the same question. We can see it as he recorded Isaiah 30:10. So many of God’s people were living in a rebellious state. They had the light, but they loved the darkness instead.

As God’s prophets tried to awaken them to their condition, their conduct made it clear they were not interested in the will of Yahweh. Their behavior was screaming, “Prophesy not unto us right things” (Isaiah 30:10), things agreeable to the mind and will of God; rather, prophesy deceits that speak peace and prosperity, even though destruction is at hand. Allow us to continue in our ways, unchallenged.

Looking out over our world today, we can feel right at home sitting down with Isaiah’s writings, comparing his work with what we see. We have much in common. What are our options? We can try screaming at the darkness. Or we can drain ourselves empty trying to force darkness into some kind of compliance. But what we’ll find at the end of our resources is the one-and-only solution: to allow God’s consuming fire to take control of our lives that we may proclaim the excellencies of Him who called us out of darkness into His marvelous light (see 1 Peter 2:9). This will not come without deliberate action on our part. To humble Christ-followers, wanting to be led by the Spirit of God to make a difference in the midst of oppressive darkness, let us commit to light a candle rather than curse the darkness. Difference-makers are students of the Word, given to fasting and prayer, approved by God, servants of Christ, not people pleasers (see 2 Timothy 2:15–21; Ephesians 6:6–8).

Anointed People Understand that Oil and Flesh Do Not Mix

“Fake it till you make it” is never a good idea, but especially when it comes to anointing. J. Lee Grady states the following about God’s anointing:

• It is not dependent on human ability.

• It is not about eloquence. Persuasive speaking skill is not the same as anointing.

• It does not exalt the messenger, it exalts the Son of God.

• It is not in looks, fashion, technology, or emotionalism.

The anointing of God brings conviction and repentance. When these are absent, we must examine ourselves. The anointing is not contrived manifestations according to Charles Spurgeon. He said, “Unction is a thing which you cannot manufacture, and its counterfeits are worse than worthless.”

First Samuel 4:5–11 records the beginning of the fulfillment concerning the ruin of Eli’s house. The people had a plan to bring the ark of the covenant into the camp to protect them from their enemies. When the ark was brought in, backslidden Israel shouted so loudly that the earth quaked. Many would call this kind of manifestation a mighty outpouring of God, but God wasn’t in it. He doesn’t anoint people that are walking outside of His will. To think otherwise is deception.

By the end of the day, the Philistines had plundered them. This was quite a sinkhole. Early in the day, they rejoiced loudly enough to cause a mini earthquake thinking the act of having the ark of the covenant in their camp would cause God to overlook their sin. God won’t be mocked. The truth about their backslidden condition was revealed to all within hours.

Nadab and Abihu, the two oldest sons of Aaron, committed sacrilege. They each brought their own censer (mixing flesh into what is holy), rather than the sacred utensil of the sanctuary. They presumptuously encroached upon the functions of the high priest. They offered incense at an unauthorized time. And, to top it all off, they filled their vessels with common fire (strange fire) instead of taking it from the holy fire of the altar. Leviticus 10 records the entire account.

O God, we repent before you. Oil and flesh do not mix. We want to be cleansed. We want your divine enablement in order to be instruments in your hand to fulfill your divine purpose. We’re willing to pay the price in prayer and fasting to see the flesh crucified.

We’re choosing between two paths: To be complicit with the darkness around us or to pay the price in the Word and on our knees to be candle lighters. Arthur Burt said, “Nothing happens until the pain of remaining the same outweighs the pain of change.” O God, help us to see ourselves as You see us. We don’t want to have the characteristics of the Pharisees, but rather we want to be shaped into the image of Christ. Bernard of Clairvaux wrote over 900 years ago the “Twelve Steps of Spiritual Progress.”

• Patience in the face of accusation

• Honesty in confessing our sins

• Refusing to assert any special rights

• Not engaging in frivolity

The Spirit is sending out a call to holiness and consecration, an inward work as we surrender to God’s will and His heart. It is counter to the culture of the day. But those who choose this path will see the glory of God like this world has not experienced before. Moses said, “Now show me your glory” (Exodus 33:18 NIV). What will our choice be?