The Law of the Harvest 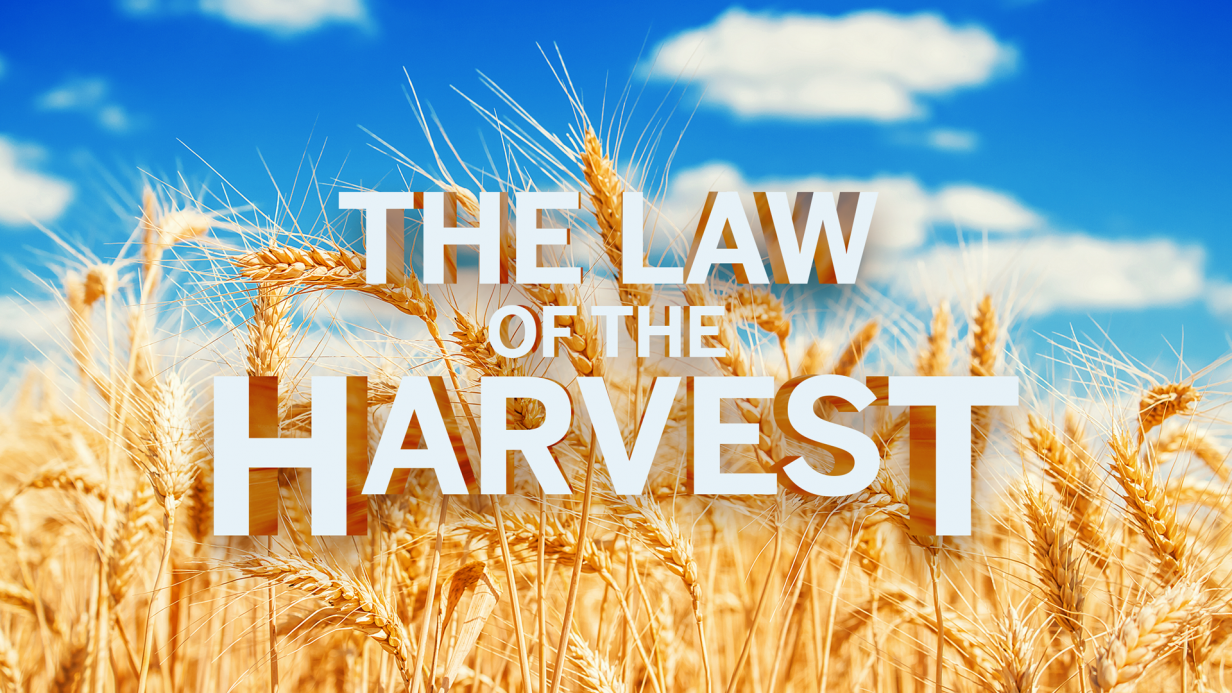 Harvest can be an exciting, exhilarating time for the planter who has worked diligently to realize a productive outcome or crop. Before the reaping can be realized, however, there has been tremendous effort and work that has occurred with the preparation of the fields, planting of the seed, and consistently and meticulously tending to the necessary care of the developing crop. The crop has had to have been watered, weeded, fertilized, and nurtured to promote growth. As the planter continues this daily process, he anticipates that all this effort will indeed produce a bountiful harvest. A lack of devotion to the intended outcome of the anticipated harvest will impact the results the planter expects. He must remain vigilant in his efforts.

J. Hampton Keathley, III, in his writings stated, “In the six days of creation, God ordered everything to produce “after their kind” (see Genesis 1:11, 12, 21, 24–25). We all recognize that this is true in the biological and zoological world, but what is true in the physical world is also true in the spiritual world. Adam was created after the image of God and he would reproduce that image from generation to generation. Because he was created for fellowship with God and to walk in dependence on Him, Adam would likewise reap the results of his actions. When he took of the tree of the knowledge of good and evil, he reaped the results: spiritual death in his own life and the life of his posterity. As a further consequence of his negative choice to live independently, his sinfulness was transmitted from generation to generation.”

Because of Adam’s decision and rebellion, the apostle Paul stated in Romans 5:12 (NKJV), “Therefore, just as through one man sin entered into the world, and death through sin, and thus death spread to all men, because all sinned.” With this being true, and because of the established truth of the law of the harvest, we are destined to be producers of sin as a result of the sinful nature. However, there remains hope for a change in nature as the apostle continues to declare in verses 17 and 18 (NASB),

For if by the transgression of the one, death reigned through the one, much more those who receive the abundance of grace and of the gift of righteousness will reign in life through the One, Jesus Christ. So then as through one transgression there resulted condemnation to all men, even so through one act of righteousness there resulted justification of life to all men.

Nicodemus, a Pharisee and a member of the Sanhedrin visited Jesus one night to discuss Jesus’ teachings (John 3:1–21). Following their conversation, regarding the new birth, note the words of Jesus to Nicodemus in John 3:6 (NASB), “That which is born of the flesh is flesh (this is the law of reaping the same in kind as we sow), and that which is born of the Spirit is spirit (the same law).” Because of this, the natural man can only sow and reap according to the flesh. But in Christ, we become new spiritual creations, new creatures with the capacity to sow and reap of the Spirit. Titus 3:5 (NASB) says,  “He saved us, not on the basis of deeds which we have done in righteousness, but according to His mercy, by the washing of regeneration and renewing by the Holy Spirit.” 2 Corinthians 5:17 declares, “Therefore if any man be in Christ, he is a new creature: old things are passed away; behold, all things are become new.” Keathley stated further, “Through God’s grace and the gift of spiritual regeneration, man gains the capacity to sow and reap spiritual fruit and reap the blessing of God on his life and in the world.” Galatians 6:7–8 (NASB) says, “Do not be deceived, God is not mocked; for whatever a man sows, this he will also reap. For the one who sows to his own flesh will from the flesh reap corruption, but the one who sows to the Spirit will from the Spirit reap eternal life.” Whatever we sow, we reap; so that, if we sow good, we will reap good. This principle, as stated in Galatians 6, is an absolute law, the law of the harvest.

The Scripture from Genesis established that everything reproduces after its kind, God can never be mocked. Just as no one can sow peas and produce watermelon, or breed donkeys and produce thoroughbred horses, so no one can sow evil and produce good. We cannot sow discord and produce unity. We cannot sow lies and produce truth. We cannot sow sin and produce holiness. If we sow to the Spirit, we reap of the Spirit. If we sow to the flesh, we reap of the flesh. If we sow evil, we will reap evil. If we have filled our minds and hearts with what is evil, we cannot bring forth what is good. Being “born of the Spirit” is also referred to as the “new birth.” The new birth is the work of the Holy Spirit, who places the believer in a right relationship with God. It is a work of God, not of man. New birth occurs when faith is placed in Christ. This regenerating work of the Holy Spirit is necessary for everyone.

Galatians 5:22–23 (NIV) says, “But the fruit of the Spirit is love, joy, peace, forbearance, kindness, goodness, faithfulness, gentleness and self-control. Against such things there is no law.” The Bible speaks of visible “fruit of the Spirit” that are characteristics of a Christian. These are the attitudes, behaviors, and traits that someone who believes in Jesus Christ should show. Every Christian is continually maturing toward Christlikeness and the Word of God helps us to understand how the Holy Spirit guides us! In that, the love of God, through Christ, which is placed in our hearts by faith at the new birth, the law of sowing and reaping, will produce love in us. I find it significant that the writer of Galatians, when listing the “fruit (singular) of the Spirit” produced in us, lists love first in the listing of the fruit. Consider the many times that love is mentioned in the New Testament: love God,  love your neighbor, love your enemies, love those who despitefully use you, love the brethren, and love one another. If we are fruitful in producing love, then joy won’t be an issue, nor will peace. Not a problem with forbearance, goodness, and so forth. This letting Christ be formed in us is a work of the Spirit! From the transforming work of the Spirit at the new birth, the Spirit produces “Spirit fruit” in us, fulfilling the law of the harvest.

Many years ago, as a small boy, it was my responsibility to “work the garden” at our home in Michigan,  along with my parents and brothers and sisters. Dad planted a huge garden every year, and as soon as we were big enough, we were sent to work the fields. Mom canned our food, and it was put away for the winter. Since we expected to eat in the winter, we had to work in the summer and fall harvesting the garden. Much hard work! Of course, Dad planted potatoes and we harvested potatoes, not turnips (although both were produced underground). Corn yielded corn. Green beans yielded green beans, and on and on and so forth. The law of the harvest remained true. Keep sowing to the Spirit and in due season we shall reap if we faint not according to Galatians 6:9. As I stated in the opening paragraph, “As the planter continues this daily process, he anticipates that all this effort will indeed produce a bountiful harvest. A lack of devotion to the intended outcome of the anticipated harvest will impact the results the planter expects. He must remain vigilant in his efforts.”

*This article is a combination of my personal writing with much of the narrative drawn from a writing by J. Hampton Keathley, III, “The Seven Laws of the Harvest,” which was published 6/8/2004 to bible.org/article/seven-laws-harvest.