DO THIS IN REMEMBRANCE OF ME 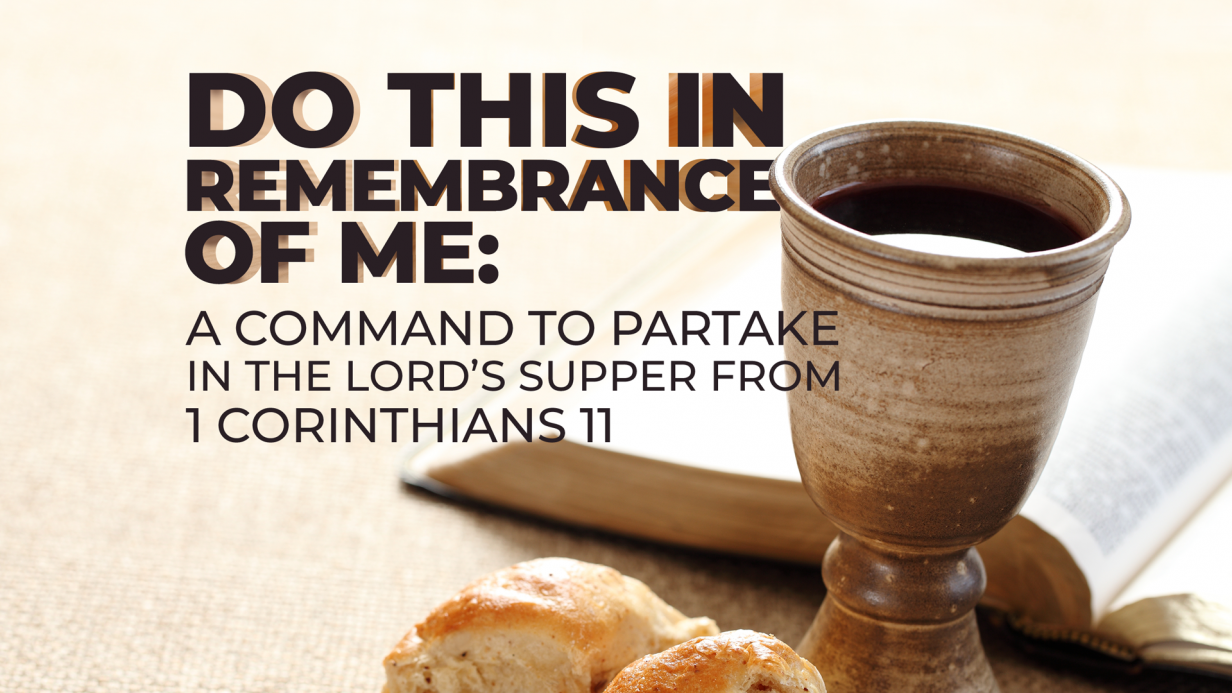 During our 100th International Assembly, celebrated on July 18–22, 2018, the Bible Doctrine and Polity Committee of the Church of God of Prophecy introduced a thorough study regarding the three ordinances or sacraments we have historically recognized (in our movement): water baptism, the Lord’s Supper, and the washing of saint’s feet. At this Assembly, the committee presented this study on the washing the saint’s feet:

The Church of God of Prophecy has historically acknowledged three ordinances or sacraments: Water Baptism, the Lord’s Supper, and Footwashing. Simple, straightforward, biblical explanations have for many years been printed in our publications; and guidelines have been established for their practice in our International (General) Assemblies. Sermons and Bible studies have been expounded from our pulpits and lecterns. However, while we have confessed the importance of the sacraments in the life of our Church, it seems that the actual practice of the sacraments has declined—especially the practice of Footwashing, and to a lesser degree, the Lord’s Supper and Water Baptism. We have endeavored to discern the reasons for this decline: Is it the lack of a strong biblical and theological foundation and understanding for these practices? Is it the lack of inspired preaching and teaching on these subjects? Is it the loss of anticipation and joy in the celebration of the sacraments, through lifeless, lackadaisical, perfunctory observance? Is it because we have lost a sense of reverent wonder and awe in the presence of The Holy? Whatever the reason may be, we feel that many of our people are being deprived of profound blessings and spiritual refreshing associated with these sacraments.1

These are questions that should motivate us to reflect, and then decide how we are going to resolve this present reality. What could motivate the abstention from or absence of the Lord’s Supper? Many times, we hear: “I’m not ready to partake in the Lord’s Supper,” motivated by the fear of undeservingly partaking, and thus eating and drinking their own judgement. I believe the lack of good scriptural exegesis has led us to many extremes, and many have served to exclude brothers and sisters that can partake in Communion. We must remember that when Paul wrote to the Corinthians, he was attempting to correct a problem within a church in a specific context, that may not necessarily apply to us. Above all, Paul didn’t praise division and dissention among the brothers in Corinth, although he considered these necessary to determine which brothers and sisters were true followers of Christ (1:10–13, 11:18, 19). Many scholars, in fact, believe that when Paul refers to eating and drinking “not discerning the Lord’s body”, he is referring to the people that cause division in the church—the body of Christ. To divide the church is to not discern the body of Christ. Therefore, those that cause division in the church, don’t understand that the body of Christ is one unit, and when they partake in the Lord’s Supper, they bring judgement upon themselves. Later, Paul expresses his discontent over the way in which some brother and sisters would behave during the Lord’s Supper. The early Christians usually celebrated this sacrament with a dinner that was called the “agape feast.”2 Scholars believe that the agape feast would be celebrated before Communion, therefore, when it was time to observe the Lord’s Supper, many would already be full, others would be hungry, and others would be drunk. Paul categorized this disorder as disdaining the church of God and ridiculing the poor (11:22). What was meant to be a practice to unite brothers and sisters in the body of Christ had become an occasion to discriminate between the rich and poor, something Paul emphatically opposed.

Abstention from participating in the Lord’s Supper is often increased by the preaching that precedes the Supper, by sermons that present judgement, terror, and death, instead of the abundant life that comes from Christ when participating in Communion. Regarding the subject of eating the bread and drinking from the cup unworthily, John Wesley states that Paul was not referring to people being unworthy, but rather of the action of eating and drinking “unworthily” (v. 29). Moreover, grammatically speaking, unworthily is an adverb, not an adjective. We all know that an adjective describes a noun, while an adverb describes a verb. Therefore, Paul was not focusing on the subject (a noun), but rather on the verbs eat and drink. The manner in which the brethren in Corinth were partaking of the Lord’s Supper was eating and drinking unworthily, because there were some people that would partake while hungry and drunk. Therefore, the emphasis here is on the way we partake of the Lord’s Supper, it is not a reflection of the partaker’s character. John Wesley said, “If we abstain from Communion because we are unworthy due to our sinfulness, then everyone would have to abstain!”3 Steve Harper, in fact, affirms that “Communion has been designed for sinners, and the only one who can be before God in a worthy manner is Jesus.”4 If Jesus is the only one that can be worthy before God, then the rest of us are unworthy, and therefore were are excluded from the Lord’s table.

What solution does Paul give us? The apostle invites us to examine ourselves, to confess and eat the bread and drink from the cup after we have examined ourselves (vv. 28, 31). The apostle “insists that self-examination and the Lord’s discipline are essential aspects of this sacramental service. Observers free themselves from the discipline of the Lord’s judgement through self-examination.”5 Partaking of the Lord’s Supper provides a time of reflection and confession of our sins to God, and provides the opportunity to reestablish fellowship with God and our neighbors. If the Lord’s Supper were only for “saints,” I wonder why Jesus allowed Judas to eat the bread and drink from the cup, knowing that “the devil having now put into the heart. . . to betray him” (John 13:2), and whom He identified as the one “that dippeth with me in the dish” (Mark 14:20; John 13:18; Psalm 41:9). Likewise, Jesus offered the bread and the cup to Peter, who would deny Him three times, and also to the rest of the disciples that would quickly abandon Him.

“Do this in remembrance of me.” The Lord’s Supper reminds us of Jesus and what He has done for us. It is a celebration that focuses on the redemptive work of Jesus, His passion, death, resurrection, ascension, and soon return to earth for His redeemed people. The Lord’s Supper is also known as Communion, because it connects us to the disciples that shared in a final meal with Jesus, before His crucifixion. It also serves to connect believers to one another in the present. It is also called “The Eucharist” (I give thanks), because it highlights the act of thanksgiving for the expiatory sacrifice of Jesus for us.10 I believe the Lord’s Supper should be a time of great blessing and celebration in our context. Eating of the bread and drinking of the cup will give us the abundant life that Christ has promised us. Just as Jesus said to His disciples: “If ye know these things, happy are ye if ye do them” (John 13: 17).

⁹Kenneth J. Archer, Revisiting the Gospel: Towards a Pentecostal Theology of Worship and Witness, (Eugene, OR: PickWick Publications, 2011), p. 72