Breakout to your Breakthrough 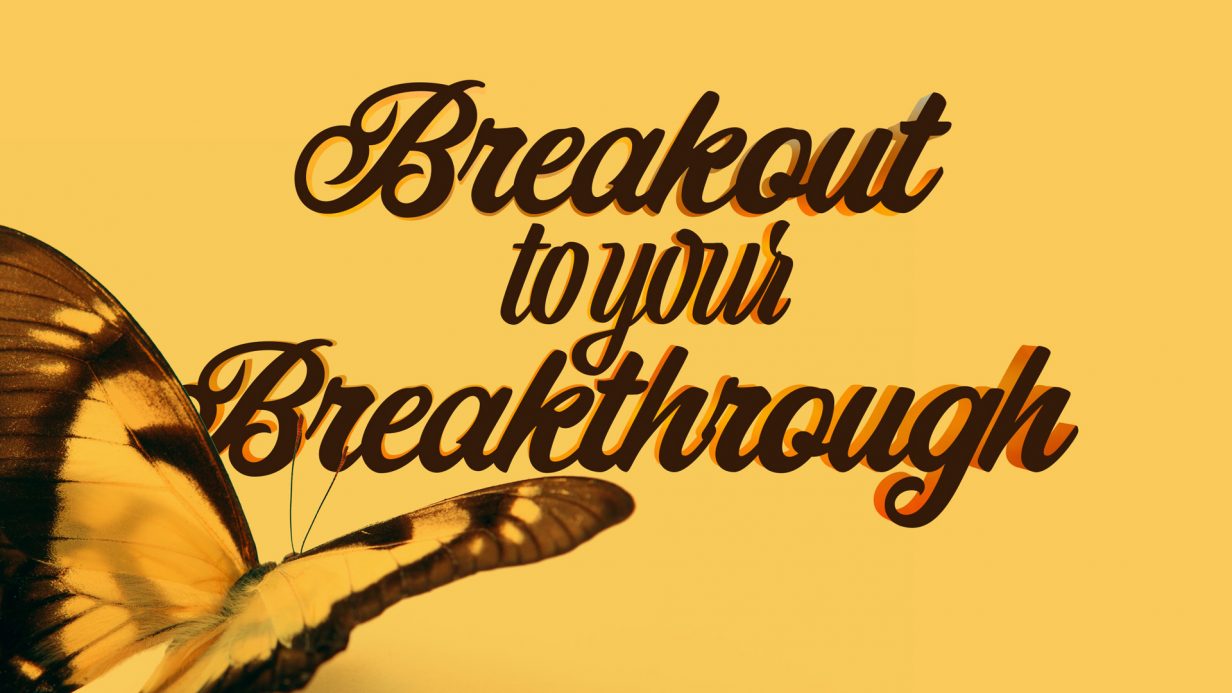 “Toto, I’ve a feeling we’re not in Kansas anymore.” Many of us are familiar with this iconic line spoken by Dorothy from the famous movie, The Wizard of Oz, produced in 1939. Dorothy’s home was a place of familiarity for the young girl, her aunt and uncle’s farm in the rural countryside of Kansas. Unexpected circumstances brought about a departure from the familiar for Dorothy and her beloved pet into a place of wonderment, adventure, and change. The unexpected circumstance of a tornadic, whirlwind transformation caused her “common” to become a new challenge of walking into a new and different reality. It is from this perspective that I want to address the concept of familiarity, commonality, predictability, and routine. Breaking out of the familiar into a breakthrough to a new reality of wonderment and change.

Featherstone, in an article published in The Guardian, suggested that familiarity breeds content. She opined that familiarity and contentment are not necessarily adverse traits and that one should embrace the “routine” to maintain a semblance of happiness. It is not my objective or position to challenge this opinion when viewed in certain contexts and circumstances altogether. However, later in this writing, I will address the importance of abandoning the familiar, the common, the predictable, and routine for transformation. We shall review the Scripture to give us courage to breakout of what is familiar, predicable, common, and routine for a transforming breakthrough into a new dimension.

Heuristics are intrinsic methods one uses to aid in decision making and experimental problem-solving as defined by Merriam-Webster. The English Language Learners definition of heuristics is that one uses experience to learn and improve. Essentially, a person, when confronting a new situation, will revert to the familiar to assist in making a decision or solving a problem.

Wray Herbert, in his writing, lends some level of clarity to the subject of heuristics by stating that they are “cognitive rules of thumb, hard-wired mental shortcuts that everyone uses every day in routine decision making and judgment.” He continues by suggesting that “heuristics are normally helpful and are crucial in getting through the myriad of decisions we face every day without overthinking every choice.” Further, he opines that heuristics can become traps.

Quoting Herbert from his article in the Association for Psychological Science Observer, 2010, he states,

The familiar heuristic is one of the most robust heuristics known, and indeed one of the original heuristics identified and studied by pioneers in cognitive science. It is a potent mental tool that we draw on every day for hundreds of decisions, and basically what it says is this: if something comes quickly to mind, trust it.  It must be available in your memory for a reason, so go with it. The basic rule of thumb is that familiar equals better equals safer.

Herbert takes the position that familiarity and comfort can be traps that produce the powerful urge for steadiness that can lock us into bad choices. We default hundreds of times a day to the familiar, the common, the predictable and routine, simply because it requires too much effort to switch to another plan. Even the uncomfortable can become “comfortable” to us considering the amount of effort necessary on our part in making a change.

A story from 2 Kings 5, 7 is of interest and worth mentioning here. Samaria, a city in northern Israel, was besieged by the Syrian army and with a severe famine in the land, sources of nourishment were being depleted so much that the Samaritans were turning to eating their own children because of the desperate shortage of food. Four leprous men sat outside the city gate, for they were forbidden to enter the city because of their uncleanness. They relied on family members and friends to bring them sustenance each day. This was their familiar, predictable, common, and routine. Unexpected circumstances caused very little to be available from within the city, apparently their sustenance was cut off and there had to be a change. One of the leprous men spoke to the others and said in verse 3 of chapter 7, “Why sit we here until we die?” They made a desperate decision to flee to the camp of the Syrians and seek mercy. Upon arriving at the camp in the dark of the night, they found the camp deserted and ample provisions of food and raiment left behind. They risked their life and safety, escaped the routine, the predictable, and the familiar, and broke out into their breakthrough.

Let’s take up the story of the healing of the woman with the issue of blood found in Mark 5:25–34. Although she has remained nameless across the millennia, her faith in the Son of God and her boldness to breakout of what was familiar and come to Christ for a breakthrough has been a teeming monument to her faith. She, for twelve years, had been the victim of unnatural bleeding and could not find relief. She had exhausted all that she had and had only grown worse. She seemed resigned to become comfortable in her uncomfortableness. But having heard of Jesus, faith arose in her spirit and she made the decision to leave the ordinary, the common, the predictable, the familiar, and routine, and breakout into her breakthrough. The apostle Luke shares a remarkable story in his gospel. Jesus was teaching along the shore of Lake Gennesaret and people surrounded Him so much, that he climbed into Simon Peter’s fishing vessel and asked Peter to push off into the water a short way, so that he could continue teaching. The timing of the events in this story is not clear. It seems the disciples, who were fishermen by trade, had been toiling the night through with little success. Following His discourse, Jesus spoke to Simon and told him to put out into deeper water. Simon Peter indignantly replied from what was familiar, common, predictable, and routine that they had worked hard all night and had very little to show for their effort. Nevertheless, at Jesus’s command, they launched out into deeper water and let down the nets to be remarkably surprised at the results of their obedience and breaking out into their breakthrough.

After having relayed these stories from the Scripture, what message is it sending to us? What is necessary to break out of what is familiar and routine in our lives and is keeping us from experiencing our necessary breakthrough? What is lacking in your life and what do you need from the Lord? What is common and familiar, even though uncomfortable, that has you trapped?

Let me recommend that you read the following Scriptures routinely and commit to rehearsing them over and over to build your faith. Let them become your heuristic! Let them help you to escape your “Kansas.”

Featherstone, Emma. 2016. Familiarity breeds content: embracing routine can make you happier at work. The Guardian Weekly, May 2016, https://www.theguardian.com/careers/2016/may/09/predictability-routine-key-job-satisfaction (accessed May 29, 2019).