Pursue the Holy Spirit: The Word of God Shows the Way 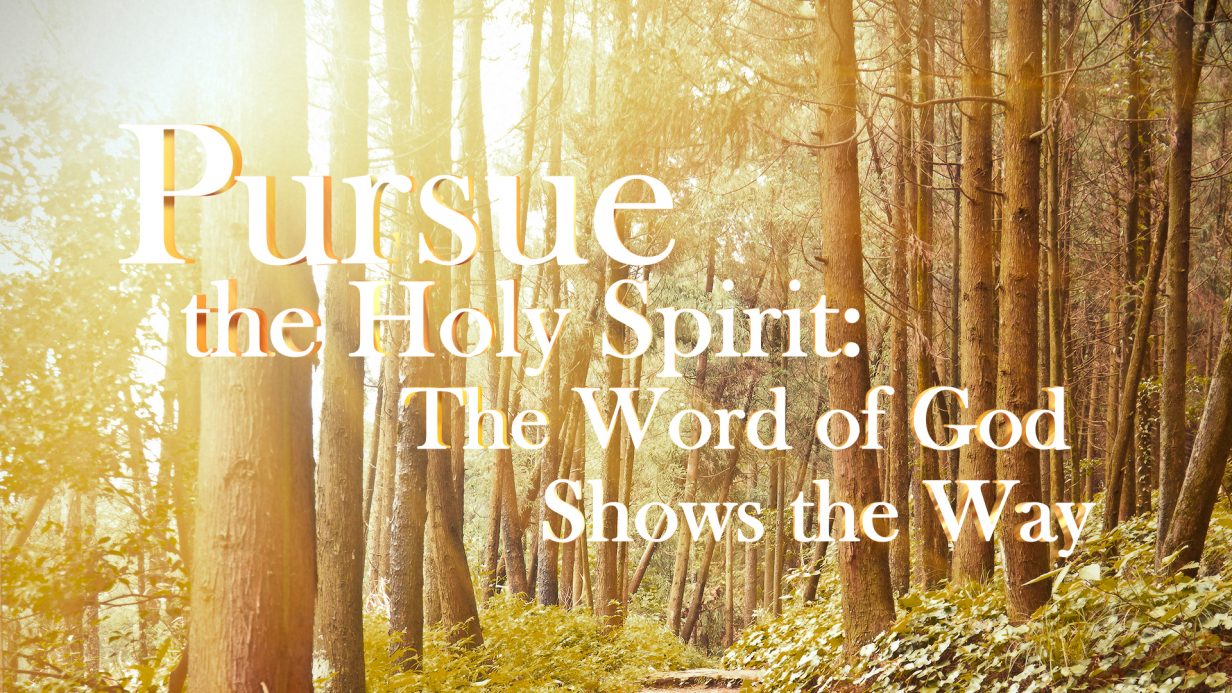 The Word of God has the power to propel us to the greatest outpouring of the Holy Spirit we have ever seen. According to God’s infallible Word, we have been given all power and authority to run into the darkness with the anointing of the Spirit and declare Jesus is the only way. BUT! We must not only hear and give assent to the Word, we must do the Word. We must not allow the fear of the world to stop us from exercising our authority in the Spirit. If we do, that fear will construct a barrier to what the Holy Spirit wants to do in our lives. We do not have access to the power of the Holy Spirit for ourselves and our own benefit while refusing to take that power into the world. We must be willing to be used as living vessels from which the Holy Spirit is poured out.

If we are to be a people full of the Holy Spirit, we must also be a people in pursuit of holiness. Paul told the Ephesians in chapter 4:22-25 “Throw off your old sinful nature and your former way of life, which is corrupted by lust and deception. Instead, let the Spirit renew your thoughts and attitudes. Put on your new nature, created to be like God—truly righteous and holy.”

There is no sin that is seemingly so small or innocent that it will not separate you from the Spirit of God. Every choice to partake in sin, no matter how small you may believe it to be, is a choice to walk away from the Holy Spirit. You cannot choose sin and choose God. You have been given the greatest gift that has ever been recorded in the history of the world – Salvation in Christ Jesus and access to the power of the Holy Spirit – don’t waste it.

We don’t have time to hobble back and forth between holiness and worldliness. If we want to be full of the Spirit, then we have to decide right now. We do not have time to play games with our salvation. Scripture says that He is going to come in the twinkling of an eye, like a thief in the night. If you are not ready, you better get ready. Paul tells the Ephesians, “Throw off your old sinful nature and your former way of life, which is corrupted by lust and deception.”

I want you to understand something very important. You cannot walk out of the grave and keep on the graveclothes. When Jesus went to the tomb of His friend Lazarus, and Mary and Martha were there weeping, He said, “I am the resurrection and the life,” and He called out, “Lazarus come forth!” Up out of that grave walked His friend Lazarus, but he was still bound in graveclothes. Jesus said, “Take off the grave clothes and let him go.”

I’m not going to compromise my relationship with Jesus for some fleeting moment of pleasure or satisfaction! I say, “Holy Spirit come and transform my thoughts and attitudes! Fill me up with your Holy Spirit until there’s nothing left of me, but it is all you! I echo the words of the Apostle Paul, “It is no longer I who live, but Christ who lives in me!” (Galatians 2:20). We are not called to walk in holiness in our own power.

We need to have the heart of Joseph, that when he was face-to-face with another man’s wife who wanted to sleep with him, he simply got up out of there!

Flee from sin and run to the Holy Spirit and the fullness thereof! This is a non-negotiable for the Church of God of Prophecy. This is a non-negotiable for you! If you want to experience the power of the Holy Spirit in your lives, and in this church like we read about in the Bible, and in the accounts of men like Granville Estep, then you must be a people who are in pursuit of holiness!

I cannot speak for you, but there have been times in my own life and in my ministry where I have missed the moving of the Holy Spirit. Not because He was not moving, but because my expectations of how He should or would move were not in line with what God wanted to do. I have done a pretty good job in my life saying that I want the Holy Spirit to move however He wants to move. But there have been times where I entered into a service or a situation where I expected God to move, and I expected Him to move in a certain way, and I missed what God wanted to do because I kept waiting for Him to move the way I wanted Him to.

I had the opportunity to serve as the evangelist for the Great Lakes summer camp last year. The theme was “God of Miracles.” Throughout the week, the Holy Spirit was moving, and we did encounter the God of miracles. Teenagers and children alike encountered the power of the Holy Spirit, and their lives were forever changed because of it.

The last service, on Wednesday night, was one of the most powerful outpourings of the Holy Spirit that I have ever experienced. I preached on the baptism of the Holy Spirit with evidence of speaking in tongues, and as I gave the altar call, the teenagers responded and many of them were filled. It appeared that the Lord was wrapping up what He wanted to do in that session. So I went ahead and gave the dismissal for the teenagers to go get their snacks.

Almost everyone left the sanctuary, but there were about 15 of us that were left in the sanctuary – the fifteen of us were all leaders. The worship team played a song as everyone was leaving, and as they did, the Holy Spirit began to pour out a fresh oil on those fifteen leaders that were left in that sanctuary. It wasn’t very long before we were dancing, and speaking in tongues, and praising Jesus Christ. Time began to pass and some of those teenagers started wondering where all the adults went.

Wave after wave of teenagers started coming back in to the sanctuary. As one wave entered, they were filled with the Holy Spirit. Another wave entered, and they too were filled with the power of the Holy Spirit. We went so long, and were so boisterous in worship, the police came and told us we had to shut it down. The neighbors did not understand the outpouring of the Holy Spirit that was happening, much like those that thought the apostles were drunk on the day of Pentecost.

So as I began to prepare for our winter retreat, I expected that the Holy Spirit would do a replication of what He did at camp. As the director, I felt some pressure within myself to direct a camp that would experience an outpouring that was just as powerful as the one we experienced at camp. As if it was my job to create the anointing. I had a faulty expectation. Not because the Holy Spirit was not going to move, but because I tried to place the Holy Spirit inside the box of “replication” instead of taking a posture of submission – allowing the Holy Spirit to move however He wanted to.

The Spirit of God moved at our winter retreat just as powerfully as He did during our camp, but in a completely different way. In one of the evening services, we were in a posture of holiness, facedown before the Lord, and spread across the sanctuary. The worship team was not even singing, we were simply seeking the Lord in silence and in a one-on-one environment. We did not shout that night, we did not speak in tongues that night, but we encountered the power and presence of the Living God.

When the option to leave the sanctuary was given, not a single teenager moved from their place and posture of seeking the Holy Spirit. We have a generation of young people who are hungry and seeking the power of the Holy Spirit. We cannot put shackles, chains, and barriers on the ways we expect God to move. We simply need to say, “Come Holy Spirit and have Your way!” We must choose to participate with the Holy Spirit, not restrict how He desires to move.

Church, we cannot afford to miss how the Spirit wants to move because we place the Holy Spirit within a box of our own creations, asking Him to do what we want Him to do, rather than giving Him the freedom to move however He sees fit.

Last year, I wrestled with the gifts of the Holy Spirit, primarily the gift of prophecy. This was because the Lord was bringing me to a place in my ministry where I felt Him pouring in to me a prophetic word to speak at a church where I was about to minister. Now, I have grown up in the church. I have seen the power of the Holy Spirit move in supernatural ways. I have spoken in tongues, I have seen God perform healings, and I have heard prophetic words spoken in corporate worship meetings, and individually over my life.

However, something in my spirit hesitated when I felt God calling me to speak a prophetic word. You see, it is one thing to preach the truth of God’s Word as it has been written, it is another thing to speak a specific prophetic word from God to His people.

The Spirit of the Lord began to do a work in my heart, He convicted me that I should be open to every gift of the moving of the Holy Spirit the same way I am open to the gift of speaking in tongues and healing. I came to the realization that if all I ever do is seek the gift of speaking in tongues, then I am restricting the full outpouring that the Spirit desires to give. It is not that we should not seek this gift, but it cannot be the only thing that we seek.

If we are going to be a church that has the Spirit of the most holy God poured out on us then we must say, “Come Holy Spirit! Move however You want to move!”

Holy Spirit, we say “HOWEVER YOU WANT TO COME AND MOVE, POUR. IT. OUT!”