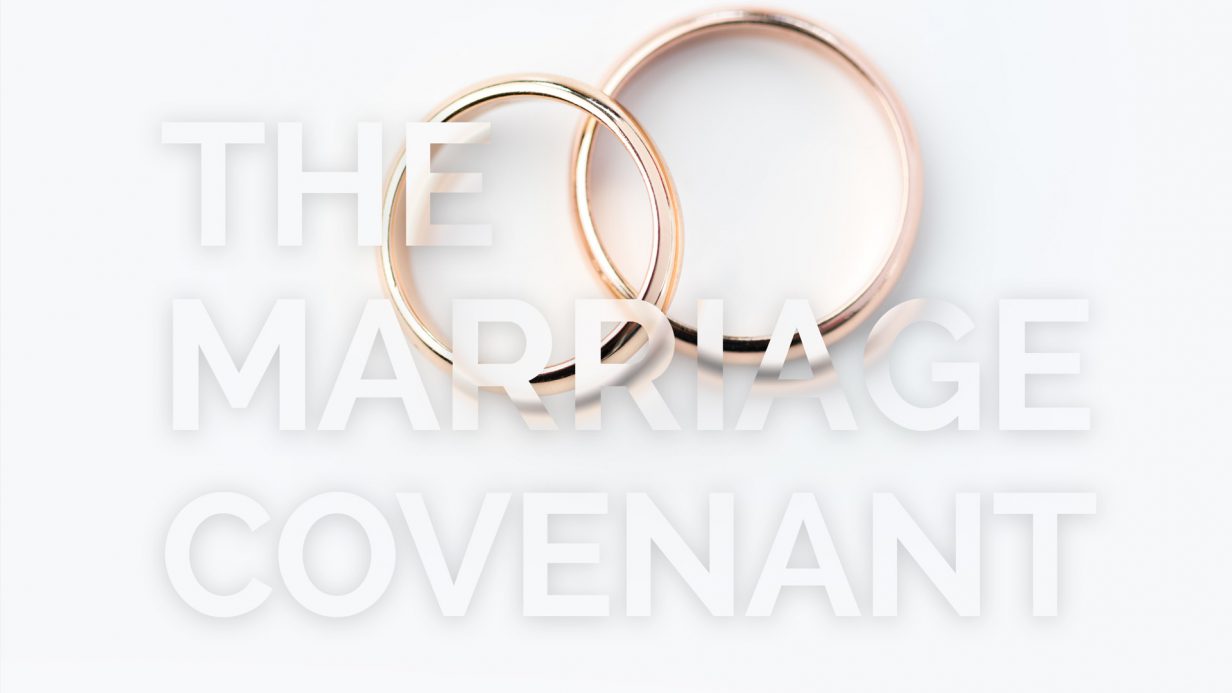 Covenant: a binding and solemn agreement to do or keep from doing; a specified thing; a contract. There are different forms of the marriage covenant. Some couples make their own vows or covenant. While others use the standard version. However, the Scripture comes into play, regardless of the form we use. It is still binding before God, when it is properly carried out. As we gather before God, our family, our friends and witnesses to join a man and woman in marriage (or in holy matrimony), it is coming before God.

Before this takes place, official records have been sought, filled out, and recorded, making it an official document of the state. It will always be there on record that these two people were officially married by proper authority. It will bear the signatures of the bride and groom, the minister and witnesses. In years past, it was much harder to break the covenant than it is now, but in the eyes of God, it is more binding than the eyes of the law. It is still a very serious and important decision to make.

Let us analyze the covenant, step by step. “Do you sincerely promise in the presence of God and these witnesses?” You are involving God and all your family and witnesses who are present. “To take this woman whose hand you hold, whose heart you have won, to be your lawfully wedded wife?” You are saying that you love her from your heart. Your heart is joined to her heart at this time. We will share what we both have: your wealth, my wealth. For some, this is a lot of wealth. For others, not so much, but the sharing principle remains.

I remember being involved in a wedding where both parties had personal things. He had several records that he would take a cotton ball with alcohol and clean them. He would wipe the needle. She had expensive, monogrammed towels. When they married, the records would be left out of their covers, and pushed in between papers and books, and were soon scratched and marred beyond repair. Her monogrammed towels soon had grease or paint on them. No thought was given to her feelings about them. The principle of the “wealth” part of the covenant is to bring into this agreement a degree of respect for each other and the things and wealth they bring to the marriage.

“For poorer” is in effect when there is very little to share, no money for McDonald’s, no Cokes or Pepsis, no pizza. We’ll make a pitcher of tea or just share in a glass of water, let baloney replace the steak. Wear the same clothes and shoes for several months or years. We share in both the good times and the tough times.

“For better or worse.” In times when there is a respectable job and good money coming in, the better times when there is no sickness or disasters. You may lose your job and then have to make sacrifices. There will be better times and worse times than right now. “In sickness and in health.” We always think sickness will come later. We are young and healthy. But in our covenant, we promise to love and care for one another in both the sick times as well as when we are both in good health.

We are to give up all emotional ties to any former relationship that we may have had. School and college courtships are no longer appealing to us. Live for the moment and enjoy the love you have for your new bride or groom. To be able to truly bond with one another, we must be able to forsake all others and cleave to our spouse. Even as important as our relationship with our parents or siblings, the one relationship between husband and wife is to be different and more special than family ties. Nothing is to take the place of this one person whose heart we have won and have become one with. Cleave is a bonding term and is the same as being glued together. Both surfaces must be clean for proper bonding to happen. It is dangerous to put anything between a husband and wife that will keep them from bonding. When the bonding takes place and they are torn apart, damage is done to both parties. Scratches and scars will show up.

It is not possible to ascertain when the marriage covenant we use now was first used. In early times during Isaac and Jacob’s marriages, it seems to be somewhat prearranged and large sums of money or possessions were exchanged. In the example of Jacob, he worked for seven years for the love of his life and did not get her and had to work seven more years. In other societies, women were captured and taken by force with the help of a few friends. However, in the eyes of God, from the beginning, it was His design that one man and one woman be united by a covenant with certain rights and responsibilities and agreeing on what was to be required.

Cherish in early covenants meant “obey” in the agreement. It was later replaced with the term “cherish.” Of course, this must work both ways. Cherish each other. The New Testament puts this responsibility on the husband, instructing him to cherish his wife as himself. Cherish means to heat, to soften by heat, to keep warm. It presents a sense with a female bird covering her young under her wings to keep them warm, secure, and safe, as a nurse would care for children.

Honor means to place great value on or esteem to be priceless. In early church history, women had very few rights. Responsibilities were many, but rights were few. To bring balance to this world, Christianity places responsibility on both the man and the woman. The wife and husband are to both give respect to each other. Special care is to be given equally, and attention paid—husband to wife and wife to husband.

A Christian husband must be understanding and thoughtful of his wife’s needs.  Giving her necessary attention and appreciation, letting her know she is valued more than anyone else, is his responsibility.  Compliments are to be paid generously, attention given freely. When she does something special, give thanks. She shouldn’t have to ask!

Women enjoy having spiritual and moral rights. A woman wants to be valued regarding her intelligence, her qualities. Show her that you recognize she has the same access to God in salvation and worship as a man. She is a specially-made vessel, like expensive crystal. The man is different. He is like a clay pot. Not inferior, but especially different. When a husband recognizes this, his marriage will enrich itself much more.

“Till death do us part.” The greatest loss a man or woman can have is to lose a longtime companion.

There was a time once when three men from our church passed away within a short span of time. We were present during two of those couple’s last moments together. As one of those men was being taken from his home by the undertaker, the wife of 52 years broke with deep emotion. The look on her face showed her great loss. The other man’s passing was no easier. While Betty and I waited together waiting on his passing, his wife sat beside his bed. He was 90 years old, she was 89. They had been married 63 years. She whispered to him as he stared into space, “It’s all right. You can go to sleep now.” Tears streamed down her face as she lovingly cooed to him: “You can go to heaven now, Weldon, it’s all right. I love you, Weldon, I’ve always loved you.”

The Bible tells us in 1 Corinthians that love never dies. Keep your marriage covenant, Church. Live your life in such a way that you build up and not tear down. Choose to nourish, cherish, honor, respect, and love your spouse. God heard you make those promises and He will help you.