Talking To Children About Sin 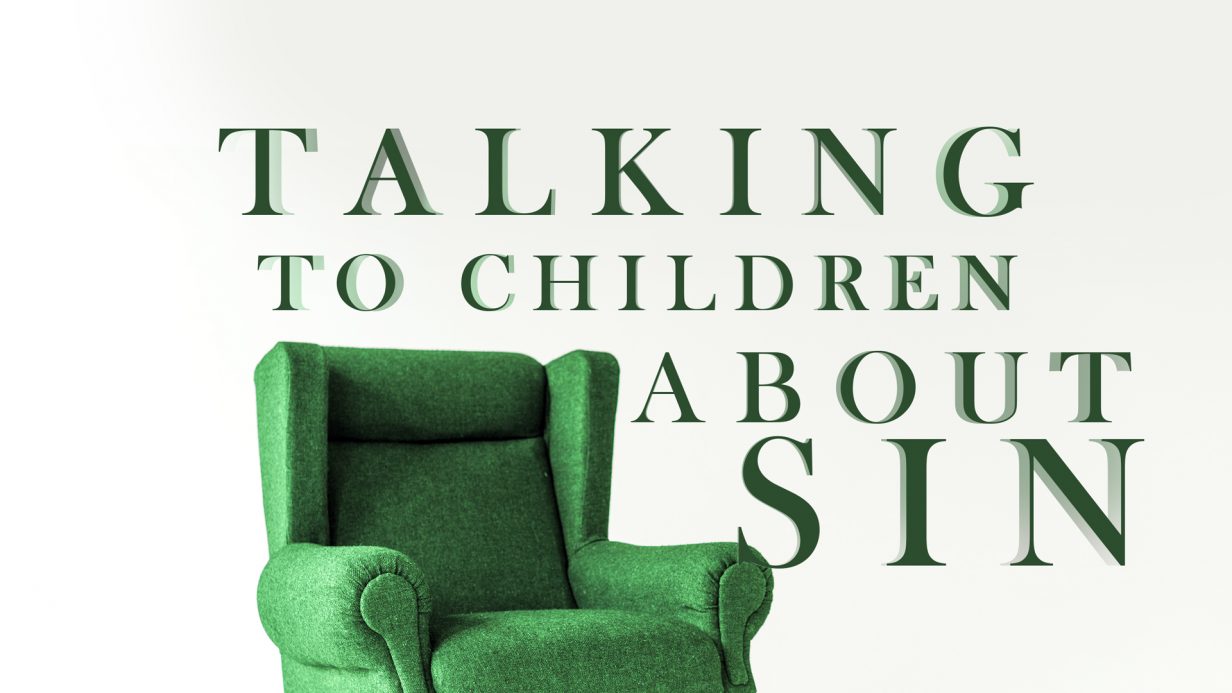 As adults, we often struggle with the word sin. We prefer to use words like mistake, error, or lapse in judgement. It is hard to face the bold truth that we have sinned. Most children do not have this problem. They are very aware of the sin in their lives. When asked if they have ever done something wrong, children simply nod their heads. If fact, many of them don’t even mind sharing! Children are also very aware of the fact that wrong actions have consequences. They face consequences, at home and at school, when they do not obey. It is during this time in childhood, when children are willing to admit their sin, that we have an open door to share the Gospel.

When talking to children about sin, we begin from a child’s starting point—sin is when I do something wrong, such as lie, cheat, steal, or disobey my parents. How do we know those things are wrong? Because God tells us in the Bible! It is important to show children verses in the Bible where God specifically gives commands not to sin. The Ten Commandments are a great place to start. However, sin is more than just disobeying God’s rules. Phil Visher, in the What’s in the Bible video series, explains to children that sin is when we choose our own way and not God’s way. It is when we ignore God. Sin originated on earth with Adam and Eve, not only because they ate the forbidden fruit, but because they chose to do what they wanted and not what God wanted them to do. Ever since that time, people have chosen their own way over God’s way. Everyone has sinned (Romans 3:23).

Once children understand sin, they must realize that sin has eternal consequences. Because God is holy and has never sinned, He cannot be around sin. Thus, if we have sin in our lives, we cannot be near God. You might show this visually by having a sign that says “God” on one side of the room and a person wearing a sign that says “sin” on the other side. Explain that because the person has sin in his life, he cannot come near God. The consequence or punishment for sin is separation from God, now and for all eternity. Children do not like the idea of being separated from God, so they will understand the need to get rid of the sin. It is important that children understand that there is NOTHING they can do to remove their sin. Many children are under the mistaken impression that they simply must be good to get close to God or to go to heaven. Yet, the Bible tells us that we can never be good enough to remove our sin (Isaiah 64:6). If we can’t take away our sin, how will we ever get to God?

It is at this point that we can share about the wonderful gift of Jesus. Because God’s son never sinned, He didn’t have to face any consequences for sin. He could be close to God. However, Jesus chose to leave heaven and come to the earth to teach us about God’s love. Then, He was killed on a cross. In Bible times, people were often put to death on a cross as a punishment for doing something wrong. Instead of dying for something He did wrong, Jesus asked God to let His death be the punishment for our sin. Conclude your visual illustration by asking someone to hold a cross made of paper or wood. Remove the “sin” sign from the person and place it on the cross.

Through His death, Jesus took the punishment for our sin on Himself. With our sin gone, we can be near God. Ask your helper to move toward the “God” sign. Now this person can talk to God, worship God, and have a forever Friend. Someday, he will even go to live with God in heaven, because Jesus took away the sin by dying on the cross.

Children must also understand that even though Jesus took the punishment for our sin, He doesn’t remove sin from our lives automatically. We must ask Him to take away our sin. “If you declare with your mouth, ‘Jesus is Lord,’ and believe in your heart that God raised him from the dead, you will be saved” (Romans 10:9).

I remember when my daughter Laura was very young. Right before bedtime, she made a comment that she was glad “Jesus was in her heart.” Just because she had heard about Jesus all her life, she thought she was a Christian. I shared with her that she had to ask Jesus to forgive her sins, so in her bedroom, with her parents by her side, she did! It was a moment that she vividly remembers as a 15-year-old young woman who still loves Jesus!

There is no greater privilege in the world than talking to children about sin because the conversation doesn’t end with the sadness and consequences of sin. Instead, it leads us to the amazing truth that God wanted to be near to us, so He sent Jesus to provide a way to remove our sin! This is our joy, our hope, and our future!